This research sub axis is structured around the heterocycle and develops two complementary thematics:

– development of methodologies for the elaboration of new reagents and innovative sequences for the preparation of heterocycles and/or their selective functionalization, with an increased interest in the stereoselectivity control.

– the design and synthesis of new ligands and chromophores, requiring the development of specific synthesis methods to obtained the target structures.

The objective is to obtain original functionalities on these cycles allowing to consider a modulation of their properties.

The projects developed are based on the laboratory’s strong expertise:

♦ polar organometallic chemistry and in particular the development of regio-, chemo- and stereoselective metallation agents,

♦ knowledge of heterocyclic systems and their reactivity.

Faced with the growing importance of chirality control in organic synthesis, we have chosen to develop new chiral organometallic systems and to study their mechanism.

The transfer of chirality is considered from the metallation agent and its chiral environment:

֍ by the development of chiral bimetallic reagents (ate complexes)

ο Association of a chiral ligand with this bimetallic system to induce a high degree of enantioselectivity.

→ Creation of a bimetallic reagent of perfectly defined structure with saturation of potential coordination sites to control chirality.

ο Introduction of chirality during the coupling step itself (atropo-stereoselective approach) by using polydentate chiral ligands (neutral or charged) as chelators and stabilizers of the metal (Li).

→ The chiral environment resulting from the aggregates should itself induce chirality during coupling.

The heterocycle is a unifying element for the HeMaF axis, so, in parallel with the functionalization work, we are developing different subjects on ligands and chromophores design with heterocyclic nuclei such as:

ο Development of preparation of water-soluble crypto-carbenes, from bis-cyclodextrinyl-bis-lariat, and their inclusion complexes with bis-imidazolium derivatives. Studies of their metallation (AgI) and transmetallation (AuII et FeII) properties leading to “crypto-carbene” NHC ligands as well as their catalytic properties in aqueous media. (AgI, AuI et FeII). Structural modulation on the macrocyclic part (cyclodextrine, calix[4]arene) and on the N2O4 or N2S4 crown.

ο Synthesis of new NHC ligands with macro-heterocyclic and macro-bis-heterocyclic structures with application in DSSC: improvement of the photophysical properties of the corresponding iron complexes / application in photocatalysis for dynamic phototherapy.

ο Synthesis of original organic chromophores/fluorophores of type D-π-A, D-π-D or A-π-A, involving a fused heterocyclic core.
ο Synthesis of totally fused, flat chromophores. Below is an example of a selective microwave annulation methodology showing the impact of the structure on the final charge transfer properties. 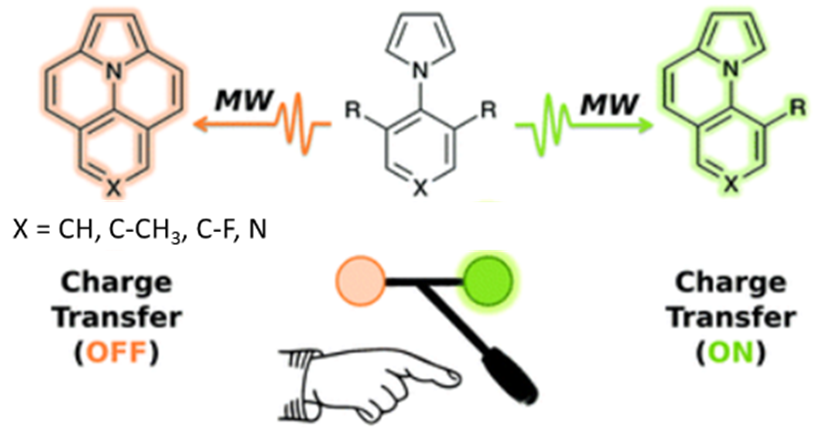 ο Development of methodology for the regioselective functionalization of condensed systems. One of possible applications involves their use in photovoltaic devices.

ο Development of new methodologies for the synthesis of homo- and heteroleptic iron(II) complexes.

to sub axis functional materials for energy and catalysis